You are here: Home / About Us / Pipe Organ 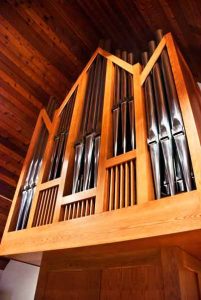 How many pipes does this organ have?
This organ has 524 pipes arranged in 8 sets (ranks.) It has two keyboards (manuals) for the hands, and one (a pedalboard) for the feet.

How big is the biggest pipe?
Low C of the 8′ Principal is nearly 6″ in diameter and stands over 11 feet tall in the center of the facade. Some other bass pipes are nearly as tall, but are mitered to fit inside the case.

Are the keys real ivory?
The white keys, or “naturals” look and feel much like ivory, but are actually covered with bleached and polished cow bones. The black keys, or “sharps/flats” are made of rosewood.

What other kinds of wood are used in this organ?
The stop-knobs are made of Pakkawood, set in terraces of American black walnut. The wood around and above the keys is also walnut. The console cabinet and the organ case are made of white oak. Maple is used for the “naturals” of the pedalboard, with rosewood on the “sharps/flats.” The windchests and interior structure of the organ are made of popular.

How long did it take to make this organ?
It was under construction in the Kegg shop for over 4 months. All the pieces were made, assembled, tested, and the dismantled and packed for transport to Williamston.

How long did the installation take?
Most of the physical installation was completed in one week. A second week was dedicated to tonal finishing and tuning.

It must take a really powerful compressor to play all those pipes?
Not as much as you might think. A finely balance .45 horsepower blower is installed in the lower section of the case and provides wind to the organ at a regulated pressure of 3 1/2″. The amount of pressure needed to play one pipe is similar to the amount of breath it takes to play a woodwind or bass instrument.

Aren’t pipe organs terrifically expensive?
Pipe organs are far more economical in the long run than electronic imitations. This pipe organ will easily last 50-80 years before needing any major overhaul. Even then it can be rebuilt rather than totally replaced. Its initial cost of $158,610 divided out over those 80 years comes to about $5.50 a day. An electronic instrument of similar resources costs around $50,000, with an average lifespan of 20 years. Electronic organs are not rebuilt, but replaced. Using a conservative 2% inflation rate, the four electronic organs it would take to keep up with just the first life of the pipe organ cost a total of $642,000, or about $22.00 a day.

How often does the organ need to be tuned?
Because organ pipes respond to temperature changes, it is recommend tuning twice a year: when the heating season begins, and when switching to air conditioning.